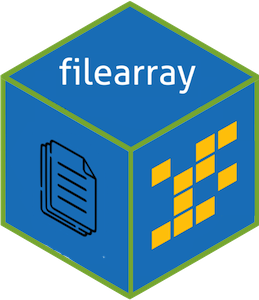 Speed comparisons with lazyarray (zstd-compressed out-of-memory array), and in-memory operation. The speed test was conducted on an MacBook Air (M1, 2020, 8GB RAM), with 8-threads. filearray is uniformly faster than lazyarray. Random access has almost the same speed as the native array operation in R. (The actual speed may vary depending on the storage type and memory size)

The internal functions are written in C++. To avoid compiling the packages, you can install from my personal repository. It’s automatically updated every hour. Currently available on Windows and osx (Intel chip) only.

Alternatively, you can compile from Github repository. This requires proper compilers (rtools on windows, or xcode-select --install on osx, or build-essentials on linux).

Process segments of array and reduce to save memories.

Transform data, and collapse (calculate sum or mean) along margins.

Available transform for double/integer numbers are:

For complex numbers, transform is a little bit different:

I. ‘OpenMP’ support and Number of Threads

If OpenMP is not detected, then only single thread will be used. This is more likely to happen on recent Apple’s system because the native support for ‘OpenMP’ was dropped. To enable ‘OpenMP’, please read this link. Find your system build and replace OMP accordingly, then run the following commands line-by-line.

Simultaneous file read/write operation is recommended on modern NVMe solid-state drives or server RAIDs. On traditional HDD, it is recommended to use single thread.

As of version 0.1.1, most file read/write operations are switched from fopen to memory map for two simplify the logic (buffer size, kernel cache…), and to boost the writing/some types of reading speed. While sacrificing the speed of reading large block of data from 2.4GB/s to 1.7GB/s, the writing speed was boosted from 300MB/s to 700MB/s, and the speed of random accessing small slices of data was increased from 900MB/s to 2.5GB/s. As a result, some functions can reach to really high speed (close to in-memory calls) while using much less memory.

The additional performance improvements brought by the memory mapping approach might be impacted by “cold” start. When reading/writing files, most modern systems will cache the files so that it can load up these files faster next time. I personally call it a cold start. Memory mapping have a little bit extra overhead during the cold start, resulting in decreased performance (but it’s still fast). Accessing the same data after the cold start is called warm start. When operating with warm starts, filearray is as fast as native R arrays (sometimes even faster due to the indexing method and fewer garbage collections). This means filearray reaches its best performance when the arrays are re-used.